Spotlight: David Gborie is a comedian, writer, podcaster and all-around thorough type dude based out of Los Angeles California. He’s appeared on MTV, Showtime, Viceland, NFL Network, Trutv, and was named one of Comedy Central’s top Comics to watch in 2015. He’s also a co-host of the wildly popular "All Fantasy Everything" podcast as well as the newer hit "Shinin’ With Sam and Dave." He’s written for Comedy Central, Fusion and the ESPY awards, all of which he thinks is pretty good for a dude who used to get 4lokos on credit at the liquor store (shoutout to Randy at Tabor Liquors). David was going to try to explain his comedy using words like “fearless” and “daring” and “new” but then he remembered he thinks that’s corny and refused to go out like that. He does want you to know that he’s a proud son of a hard working Sierra Leonean mother, he reps Colorado real heavy and he’s never called the cops. 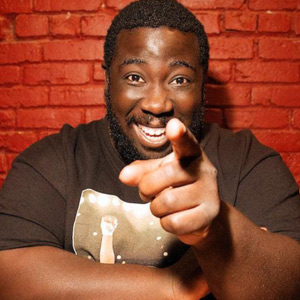 David Gborie is a comedian, writer, voice actor and all-around thorough dude originally from Denver, Colorado. He's recently appeared on NBC's "AP Bio," TBS's "Chad," and can currently be heard as the voice of Comedy Central. He is the co-host of the wildly popular All Fantasy Everything podcast and will soon be featured in the adult swim animated series "Royal Crackers," the star-studded music video for George Harrison's "My Sweet Lord," and Netflix’s animated series "Exploding Kittens," produced by Mike Judge and Greg Daniels. David is the proud son of a hard working Sierra Leonean mother, reps Colorado real heavy and he’s never called the cops.